Eighteen-year-old Myla Lewis is a girl who loves two things: kicking ass and kicking ass. She’s not your everyday quasi-demon, half-demon, and half-human, girl. For the past five years, Myla has lived for the days she gets to fight in Purgatory’s arena. When souls want a trial by combat for their right to enter heaven or hell, they go up against her, and she has not lost a battle yet.

But as she starts her senior year at Purgatory High, the arena fights are not enough to keep her spirits up anymore. When the demons start to act weird, even for demons, and the King of the Demons, Armageddon, shows up at Myla’s school, she knows that things are changing and it is not looking good for the quasi-demons. Myla starts to question everything, and does not like the answers she finds. What happened 17 years ago that turned the quasi-demons into slave labor? Why was her mom always so sad? And why won’t anyone tell her who her father is?

Things heat up when Myla meets Lincoln, the High Prince of the Thrax, a super sexy half-human and half-angel demon hunter. But what does a quasi-demon girl to do when she falls for a demon hunter? It’s a good thing that Myla is not afraid of breaking afew rules. With a love worth fighting for, Myla is going to shake up Purgatory. 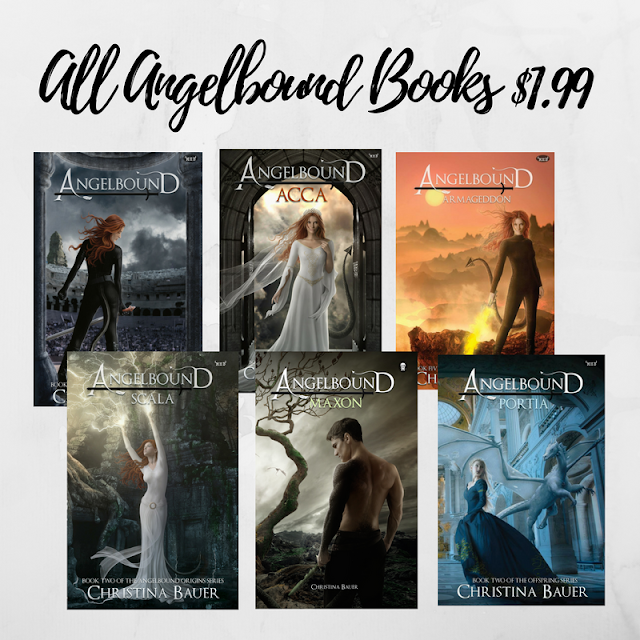 Monster House Books is celebrating the launchof the audiobook version of the best seller Angelbound, both on iTunes & Audible! As a result, every launched book in the series is only $1.99, aka more than 50% off…And that includes Angelbound ACCA, which was only released a few months ago!
My Review: 5 Out Of 5 Stars

Genre: Angels, Another-World, Audiobook, Ghosts, Hysterical, Romance, Royal-Court, Mystery, Supernatural, Suspense, Teen, Zombies-- Myla lives her existence in Purgatory, kinda sorta following the rules of the quasi-demons, living for the days she is called to serve in the Arena. There she is able to use her kickass fighting skills to battle evils souls to send them to Hell. Her humdrum life is thrown of its head when she encounters an arrogant Thrax boy, who just so happens to be the Prince of all the Thrax. Not to mention her mom is even more evasive about her mysterious father, her best friend (aka only friend) Sissy has a time-consuming boyfriend, and she has been getting some unexpected attention from the Angels and the Demons during the arena matches. Myla has no idea, but her world will never be the same.​

​I have owned this as an ebook for the last few years but I never got around to reading it. When I was offered the chance to listen to it as an aubiobook I was interested. I was a tiny bit hesitant since the author was reading it and not a trained professional (I have no idea if audiobook narrators get training, but I am just throwing it out there), and I am super picky about my narrators but I figured that I would give it a shot. Which, by the way, I am so glad I did. I absolutely loved this book as well as everything about the performance from the author. After finishing the audiobook, I immediately went and purchased all the available books in the series, but honestly, I would (happily) rather wait and have them read by the author. Make sure you listen to the afterward (acknowledgement?) by the author after the story, it was hysterical. Myla was such a great character. She was strong, competent, snarky, considerate, no-nonsense and knew who she was and liked herself the way she was. She always did the right thing, even if she knew there would be consequences. I loved seeing the Wrath demon side of her and how emotions brought out different aspects of the demon. Also, the fact her tail had a mind of it's own was incredibly entertaining.

The author created such a multilayered world, with so many unique types of supernatural created and a crazy hierarchy and rules unlike anything I have seen. I enjoyed the history of Purgatory as well as how everything fit together. Overall this was a great fantasy/action/mystery with some touches of romance and a heaping of humor (with an awful cliffhanger like ending that had just a hint of hope). I can't wait to read the rest of the books (ie have them read to me) and now I am a super fan girl (and I heart Lincoln). I received this title in return for my honest review.

Christina Bauer knows how to tell stories about kick-ass women. In her best selling Angelbound series, the heroine is a part-demon girl who loves to fight in Purgatory’s Arena and falls in love with a part-angel prince. This young adult best seller has driven more than 500,000 ebook downloads and 9,000 reviews on Goodreads and retailers. It is now available as an audiobook on Audible and iTunes.

Stalk Christina on Social Media – She Loves It!