From the author who whisked you away on a wild escapade in The Key West Escape Series comes a sexy, adventure-packed spin off. Follow Mitch Thompson and his team of misfits as they find danger, intrigue, and romance on the hunt for the legendary Lost Souls’ Treasure…

Former special ops aviator Griffin Dodge spent two years working on a marine salvage crew based out of Key West after his military career abruptly ended. The only person he let himself get close to on the Salty Dog Crew was a woman called “Bug.” They couldn’t have been more different – the former all-star golden boy from the Midwest and the scrappy French circus performer turned salvage diver – but she became his best friend. Griff was happier than he’d been in a long time, but when his first love called to say she wanted him back, he caught the next flight out of town. A year later, Bug still resents Griff for ghosting her and the crew after he left. She’s furious when he shows up out of the blue to do a favor for her boss. It doesn’t matter that Griff is single again or that he’s sorry, she hates that she’s stuck flying shotgun to Martinique beside the guy who abandoned their friendship and betrayed her trust. The trip was supposed to take two days tops. Just enough time to meet with an artifact collector who claims to have the missing pages of a diary that could lead them to The Lost Souls’ Treasure. But when the deal goes south, and Griff and Bug are caught breaking and entering, they’re forced to escape up the side of a volcano where the lava isn’t the only thing about to bubble over. The tension between them erupts into an unexpected night of passion that leaves them both uncertain about what comes next. While Griff starts to question if settling down in the suburbs still fits the man he’s become, Bug isn’t so sure she’s willing to open her guarded-heart to the only man who’s ever broke it. When a rival treasure hunter hellbent on beating the Salty Dog Crew to the treasure takes Bug hostage, Griff realizes his future plans won’t matter, if he can’t bring his best friend home alive.

Genre: Romance, Suspense-- Griff returns to Key West to do a favor for his old boss, expecting to show up and help and then get back home to his real life in a day or two. All he really wants is to have a stabile life, make enough money that the woman of his dreams wants to be a part of his life, and then he can fianlly live happily ever after. His only regret about leaning his slavage crew before was not saying goodbye to his best friend Bug. Bug has spent the last few years alternating between being sad and mad that Griff took off without a single look back. When he shows back up in her life she resolves to not tell Griff about her feelings of love and act like nothing was ever amiss. But when danger and close quarters force Bug and Griff into a tricky situation, can they keep their feelings under control and focus on the prize of the lost treasure? Told in dual narration by both main characters (which is how all romance books should be!), Bug and Griff, the reader gets to be immersed in the romance, struggle, action and heartbreak that makes up this story. Tricia created a fast paced romantic suspense that kept me turing the pages and I was fully immersed in the story and the chracters. The only reason that I took half a star away was due to how mad Griff made me with his inability to see what was right in front of him. Obvisiously I was very into the book enough to have my feelings hurt for Bug. I highly recommend this series for anyone who likes non-stop action, a cast of characters that make an odd sort of made family, an impossible treasure hunt, and a sweet slow build friend to lovers romance (that has a nice dollop of steam!). I love that I get a new group of people to meet and root for with this Lost Souls' Treasure series, I had been missing the Key West Escape group. The thing that this author does best is her characters, they are so developed and real, I feel like I know them and connect to their struggles. Be aware that you will fall in love with the people and adventures when you start this series. 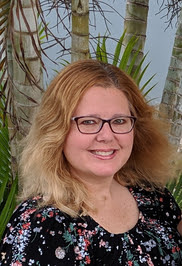 TRICIA LEEDOM enjoys traveling to exotic destinations and having torrid love affairs with hot, dangerous men… even if it’s only in her own mind. When she’s not writing romantic adventure novels, she reads voraciously, tweets compulsively, and fangirls over a TV show based on her favorite book series. Tricia earned her BA in Creative Writing from The University of Tampa and her MFA in Writing Popular Fiction from Seton Hill University. Her favorite authors include Diana Gabaldon, J.R. Ward, Susan Elizabeth Phillips, Karen Robards, and Johanna Lindsey. She lives in Southwest Florida with two very spoiled dogs. Follow Tricia on Twitter and Instagram @tricialeedom