Blog Tour & Giveaway: The Pantheon Prophecy by A. Maureen Burns 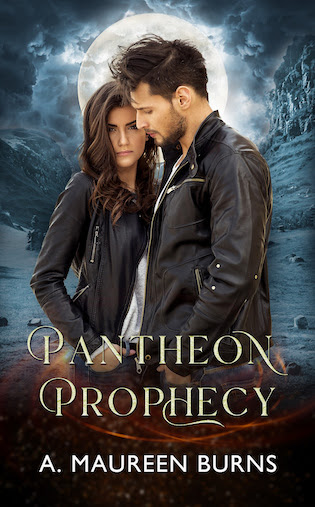 We live in a world where demigods , gods, and Ancients from the Pantheon are sworn to protect humanity. So when an exiled member of the Pantheon decides to kill everyone on earth, a demigod knight is given the mission to stop it with the help of a human.

28 year old book store owner, Elspeth, is about to find out she’s a natural born witch when she’s approached by the immortal knight in charge of protecting her.

Luka has been offered ascension into the Pantheon as a god if he completes his mission and stops the moon from colliding with the earth but his charge doesn’t truly know the first thing about her gift of mind-reading or anything about her rightful place within the Pantheon.

Everyone on the planet will die if Elspeth and Luka can’t find a way to trust in their own abilities and work together despite their growing attraction for each other.

With all of her mind focused on the surface of the moon, Elspeth squeezed her eyes shut and felt the separation of her soul from her body. Space and time were nothing to an immortal soul and she found herself on the moon. The weightlessness was difficult to control and Elspeth felt exposed not having Kali there to guide her. It was just her and Luka and he had never daydreamed so far before so it was new to both of them. For a split second the idea of drifting into space tantalized her. Leave all her problems behind and floating away into nothingness. She stared into the void of distant stars. It pulled her as the ink stain on her soul grew a little larger. Luka tugged her back from the edge. "Focus Elspeth. Stay with me." "I don't know what just happened. The emptiness pulled me, drew me to it." They stood before the large rock on the edge of the meteor canyon and stared into the abyss of the tunnel. It occurred to her that it was a large risk she was taking and there were no second chances if the tunnel tore her apart. Back in the chair, her breathing became shallow and she was squeezing Luka's hand tight. Though they both hovered next to the tunnel she could still feel him rubbing the back of her hand with his thumb. Together in their minds, and on the surface of the moon, he turned to smile at her. "I'm right here with you Els." They looked back to earth which was much closer than the last time. The haze of smoke completely surrounded earth and sent tendrils into space. The winds seemed to rage and swirl the smoke so that they could see patches of land. The destruction was catastrophic even if they did have success. Though their bodies were back in the Citadel, they could see each other's aura, their essence of the soul. Luka's aura wasn't as vivid as hers as he blocked her path to the tunnel. It was ripping into the tunnel. "Are you sure you want to do this Els?" "Look over my shoulder Luka. This is not about me anymore, if it ever had been. They need us now. I know you think I can't do this but I have to give it my best shot. Kali thinks I can and I'm counting on it." "I don't doubt your ability Els. I'm just not sure you have the ability to tap into all of your strength yet. We, all of us, grow into our gifts with time." She looked back at earth. "Time isn't something we have a lot of right now, Luka. I must try. I have to trust that the gods chose me for a reason. I'm doing all that I can." Their auras floated together for a moment. Luka reached out to her and grabbed where her heart would be. "I'm here with you Els. That's all I can do. Let's hope it's enough." Together at the edge of the tunnel both of their auras began to fray apart and get sucked into the darkness. They were pulled in bit by bit. She felt queasy back in her chair but wasn't sure if it was a physical manifestation of the trip or the idea of getting torn to shreds. Elspeth had thought it would be a roller coaster of a ride in the tunnel with flashing lights but she was wrong. It was wrong. It was like nothing. No ability to tell up from down or left from right. Not a glimmer of light to guide her way. The tunnel had snatched her from the moon and she was alone while time stood still. A new fear crept into her because she couldn't even see Luka in her mind's eye. There was no physical body to rely on and her soul was floating somewhere and going somewhere else and she had no idea. It was difficult to control her thoughts. Is this what a panic attack felt like? Even without her body, she thought her lungs were getting ripped out of her chest. She didn't even feel an inkling of a connection to her physical body anymore. She was alone. Then when she was unsure of how much more she could take, the darkness began to fray into a light and she finally saw the dim shimmer of Luka's aura. It grew and grew and she focused on him until she felt the binds of the tunnel let her go. They had landed on a different planet. 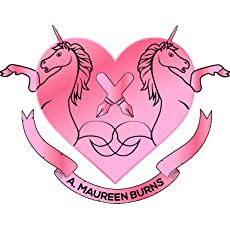 Maureen is an Air Force vet and world traveler. When she’s not hanging out with family, friends, and a menagerie of family pets, she’s dabbling in photography. Reading and writing have been a part of her life for just over three decades and there doesn’t seem to be an end in sight. This is great because this world-creator has dozens of souls living in her head that are waiting to be written down and shared with the world.