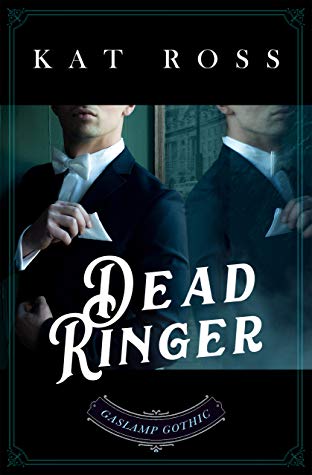 A poisonous secret.
A terrifying curse.
And a client she’d just as soon see dead in a ditch….

Summer 1889. Harrison Fearing Pell hoped for adventure when she signed on with the Society for Psychical Research as an occult investigator. Slogging through New York’s sewers in pursuit of a “mud man” wasn’t exactly what she had in mind. But the reeking monster terrorizing the dance halls of the Tenderloin leads her to an even more peculiar mystery — and the last man on earth Harry wishes to become entangled with.

James Moran is a prodigy in music, mathematics . . . and crime. Harry’s older sister, the famed detective Myrtle Fearing Pell, has vowed to put him behind bars. But Harry owes Moran a personal debt, so when he demands her aid she can hardly refuse. It turns out that the brilliant black sheep of New York Society is part of a secret club at Columbia College whose members have started dying in bizarre ways that may not be accidents.

Thus begins one of the strangest cases of Harry’s career, a tale of murder, cold-blooded revenge and fairytale bogeymen to make the Brothers Grimm shudder. As the bodies pile up, each preceded by sightings of the victim’s doppelgänger, Harry and her stalwart friend John Weston must race against time to save a man who arguably deserves his macabre fate.

Genre: Historical, Mystery, Supernatural, Suspense-- If you have not read the series yet, still feel free to pick this title up to begin with. That is the nice thing about most of the books in the series, the mystery aspect is able to be read alone, without any backstory. If you want character development, start from the beginning and read all the books, but if you just want a good paranormal mystery, feel free to red them as you see fit. I loved that this had so much going on in it, be it personal drama to multiple paranormal aspects that I had not previously seen in the same book before but somehow Kat made it blend perfectly together. I have been entertained by all the books in the series, but this is hands down my favorite! The tension in the story built and built, until I was on the edge of my seat, full of jumpy nerves and about to burst with my need to know what would happen next.

I fetched Washing Away of Wrongs and related the story about the bloody sickle and the blowflies. It seemed to perk her up a bit, so I read the chapter on suicides by edged weapons and how to tell when a death by manual choking – i.e., murder — is disguised as a death by hanging. “That’s a delightfully grim little volume,” Myrtle observed. “Weston gave it to you for your birthday?” I nodded. “He’s a keeper, Harrison. Pray continue.”

This is the story I have been waiting for ever since I first met Harry back in the day during the first Gaslamp Gothic book! I am trying to avoid spoilers here, but I hoped with all my heart that there would be a love connection between her and a certain wonderful male character and the ending of this book hinted at such and now it has become my favorite of the series! Sure there was a lot of really great things happening in the book plot and character wise, but that romantic hope stole the show. I really hope that we get to one day have a story told from Harry's sister, Mrytle's point of view and maybe she can have a certain complicated, tormented bad boy as a love interest... just saying. But until that hypothetical story comes about, I will keep on reading the creepy paranormal mysteries set in this world!
----------------------------------------