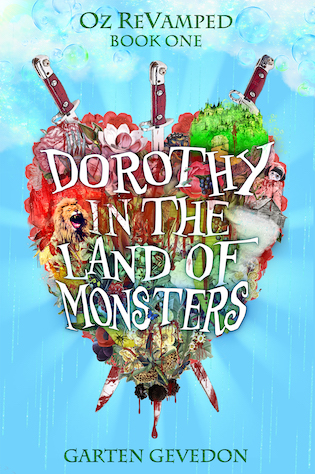 Shifters, Zombies, and Vampires? Oh my!

My name is Dorothy Gale, and I think I might be dead.

When my dog Toto and I got swept up in a twister, we landed in hell. A very colorful hell. Like a rainbow dripping in blood. Now it looks as though this dreadful underworld plagued with vampires, zombies, and shifters will be the site of my eternal damnation.

They say this terrifying land called Oz isn’t hell or purgatory and escape is possible, but first I must survive the journey down the blood-soaked yellow brick road to the only place in Oz where vampires dare not tread—The City of Emeralds.

With enchanted footwear and the help of my three new friends—a friendly zombie, a massive shifter lion, and a heartless axe murderer of evil night creatures (who also happens to be the hottest guy I’ve ever seen)—Toto and I have a chance to make it to the Vampire Free Zone. When we get there, I must convince the most powerful wizard in this magical land of monsters to send us out of this radiant nightmare and back to the world of the living. They say he’s just as frightening as this monstrous land, that he detests visitors, and even the most horrifying creatures cower in his presence. But I must seek him out. And when I find him, I’ll do whatever it takes to make him send me home.

Genre: Another-World, Mystery, Retelling, Royal-Court, Supernatural, Suspense, Vampires, Witches, Zombies-- Dorothy is in a funk, stuck in a gray fog of depression, living on the farm with her aunt and uncle since her parent's death. When a storm comes through the area, instead of going into the storm cellar with her aunt, Dorothy chases her dog Toto, ending up in her and Toto getting stuck in a series of events Dorothy doubts are real. Next thing she knows, Dorothy finds herself a killer with a house as a weapon, new scary shoes and a quest to embark on. This is not your mother's Wizard of Oz! Nope, this is something completely different from any sort of Wizard of Oz assumption, and so much darker! As a fan of anything Wizard of Oz, I was excited to pick this up to see where this adventure would take me. The backbone of the original story is still there, with Dorothy stuck in a tornado that brought her house, herself and her dog Toto to a magical land, her killing a "witch" with the house and getting her shoes as an inadvertent reward, and a quest to Oz with a random gang of characters. But for sure, Garten took some very unexpected turns along the way. I bet you never expected to see zombies and vampires in Oz? Be prepared, this was dark and twisty, gory and random, something very new indeed. This is the first book in a series, with so many issues left unresolved for Dorothy and crew having to face in the future. I don't think I will be continuing the series since I had a hard time getting into the story and I could not really connect to anyone, but I can appreciate the unique pathways taken and I know that a lot of people will really love this revamped Oz adventure. I reviewed a complimentary copy of this title.

Garten Gevedon lives in New York City with her family. She's a sci-fi, fantasy, and paranormal author who loves taking fairy tales and turning them inside out. You can visit her online at www.gartengevedon.com.