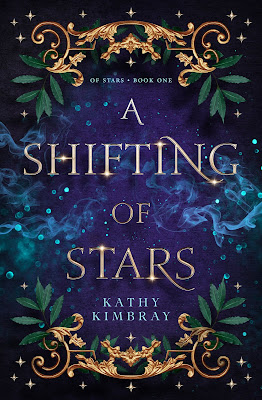 A Shifting of Stars
by Kathy Kimbray
Genre: YA Fantasy
Release Date: May 28th 2019

A squandering emperor. A handsome stranger. A reluctant heroine. And the ancient magic that will capsize a kingdom.

Seventeen-year-old Meadow Sircha watched her mother die from the wilting sickness. Tormented by the knowledge that the emperor failed to import the medicine that would have saved her, she speaks out at a gathering of villagers, inciting them to boycott his prized gladiator tournament.

But doing so comes at a steep cost.

Arrested as punishment for her impulsive tongue, Meadow finds herself caught up in the kind of danger she’s always tried to avoid. After a chance meeting with an enigmatic boy, she’s propelled on a perilous trek across the outer lands. But she soon unearths a staggering secret: one that will shift her world—and the kingdom—forever.

Filled with longing and heart, surprise and wonder, A SHIFTING OF STARS is the first book in Kathy Kimbray's gripping Of Stars trilogy. 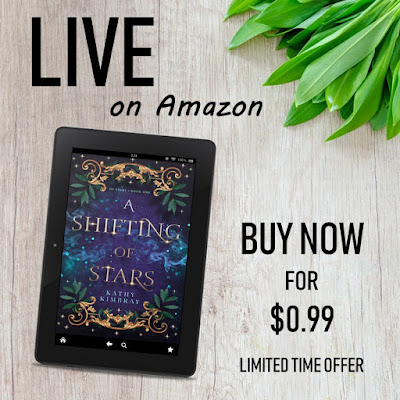 Genre: Another-World, Heart-Wrenching, Mystery, Royal-Court, Supernatural, Teen-- Meadow is dealing with the grief of the death of her mother, causing her to go to a meeting where she is allowed to read a poem she wrote- a poem that was suppose to be about her grief but somehow evolved into her anger over the ruling family, causing others to step up and take a stand. Unfortunately, that is the same time the cruel prince enters the establishment and arrests Meadow for her treason. When Meadow finds herself locked away in prison to await her punishment, she has no hope for her world- that is until an unknown guard releases her and she is told she has a greater purpose in the struggle against the royalty- a purpose she has no idea of. This was another book that has such a gorgeous cover and we all know I am attracted to the pretties! I had already wanted to read the book since the synopsis appealed to me, but once I saw the cover I knew it was love. I will admit that I struggled getting into A Shifting of Stars. The reader is thrown into a strange world, basically in the middle of a conflict that does not really make sense without any backstory. The main character is arrested for starting a (sort of?)riot and thrown into prison- after taking a side trip to watch a gladiator death match on the way. I was really lost. The action just kept going from there, but not really taking the time to fill in the pieces of the world, instead more characters and conflict were added to the mix and I was in over my head. It almost felt like the start of this story was a sequel, where everything had been set up before, and you just jump right in here. I kept on trudging along in the book and finally things started to come together to make a very complicated, unique and interesting world. Kathy uses a very descriptive writing style, where the scene is completely visible for the reader to see and experience right along with the Meadow, be it sight, taste or touch. Every detail comes alive with detail and flowery analogies, making this the perfect next read for those who love Laini Taylor's writing style and world building. Also, the magic was subtle, almost not there but powerful enough to change lives and empires- and with a very surprising and unique flavor to it I appreciated. A Shifting of Stars is the first in what appears to be an epic, dangerous, magical and heart-breaking YA high fantasy series where anything is possible and people may not be who they appear to be... I reviewed a complimentary copy of this title. 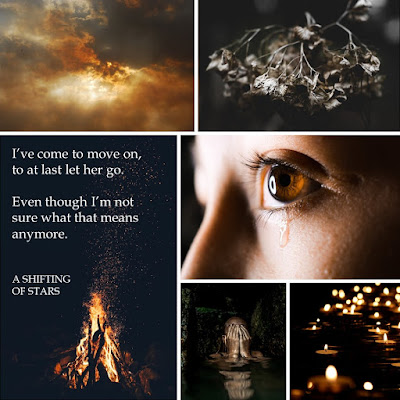 About the Author
Kathy Kimbray is a YA author from Australia.

She loves summer, dancing and dreaming up big ideas. A SHIFTING OF STARS is the first book in her thrilling new YA fantasy series.

Giveaway:
a Rafflecopter giveaway
Posted by krlga00 at 11:34 PM